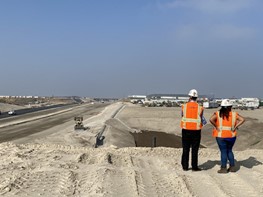 Work began in October to pave the last stretch of the SR-11 that will connect to a new port of entry in Otay Mesa.

“I’m so excited the city is thinking big time now,” said Moreno, whose district includes the border and Otay. “We are one of the most important cities in the nation. We need to up our game.”

To help do that, the city applied in March for state grants to help fund both projects. Earlier this month the city got $22.7 million for the La Media project and $42.5 million for the new border crossing.

The new money for the third border crossing helps bridge a gap between the $523 million in place for the project and its $944 million estimated price tag. The new crossing is scheduled for completion in late 2024.

The boost to border commerce created by the two projects will help Otay Mesa, which is already in the midst of a building boom, become an even more important part of the local and state economy, Moreno said.

“This is huge,” Moreno said. “My goal is to make Otay Mesa the Sorrento Valley of the South Bay.”

The area already has dozens of new industrial projects and vast housing subdivisions under construction. In addition, dramatic renovations are planned at Brown Field airport.

Another boost has come from the Cross Border Xpress, a bridge from Otay Mesa to Tijuana International Airport that opened four years ago and is used by more than 2 million people a year.

But narrow La Media road and congested border crossings have been challenges for the area.

“I think it’s high time the state and the city give La Media the respect it deserves,” Moreno said. “Right now they are crossing on a little agricultural road.”

In 2019, California exported nearly $30 billion worth of goods to Mexico. More than 2 million trucks carried $48 billion in imported and exported goods through the Otay Mesa Port of Entry, many of them on La Media Road.

“This project will repair a vital piece of our freight transportation network and alleviate congestion by reducing truck idling and congestion caused by trucks on local streets,” Moreno said.

Designs for the project are expected to be complete by early 2022.

The other $20 million for the road widening comes from developer fees, the county’s half-cent sales tax surcharge for transportation projects and the Otay Mesa enhanced infrastructure financing district created in 2017.

The first such district in the state, it allows some of the property taxes generated by new development to no longer go to Sacramento or the city’s general fund. Instead the money stays in Otay Mesa to pay for roads and other amenities.

The new border crossing is a partnership between Mexico, the U.S. federal government, the state Department of Transportation, the city and the San Diego Association of Governments.

It will be a four-lane toll road connecting directly to a state-of-the-art Customs & Border Protection crossing and a California Highway Patrol commercial vehicle enforcement facility.

This fall paving began on a 1.2-mile section of road that will connect newly built State Route 11 to the new border crossing, the final stretch of road needed for the project on this side of the border.

Additional features will be a border “wait time detection” system, advanced traveler information to improve route planning and an optimized port of entry capacity to decrease congestion and wait times.

“Cross border travel and commerce is vital to our communities and our region,” Moreno said. “The Otay Mesa East Facility will help in alleviating the congestion the San Ysidro Port of Entry faces daily by giving travelers an alternative route to cross into the United States.”

Mexico also recently agreed to spend $132 million on the project on its side of the border.

Moreno said local residents should be pleased that the two grants mean some of their tax dollars are coming back to San Diego to boost the economy here.

“This is money we need to keep fighting for,” she said.